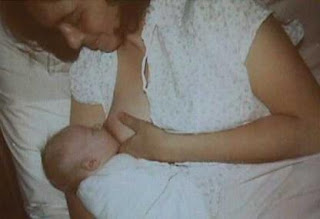 Women who are planning homebirth often ask me if I would be happy to attend a breech birth at home. There’s no easy answer. I have had very little experience in breech birth, and breech is clearly outside the boundaries of ‘normal’ birth, even though it is natural. The very real situation that presents itself today is the deskilling of midwives, and of obstetricians, in breech birth. A baby may be harmed or die simply because the midwife or doctor did not know what a more skilled person could have done to achieve the best outcomes.

A large multi-centre research trial, the ‘Term Breech Trial’ by Hannah and others (2000) has led to the conclusion that: “Planned caesarean section compared with planned vaginal birth reduced perinatal or neonatal death or serious neonatal morbidity, …” There has been a lot of discussion in professional circles as to why this conclusion was reached, not the least being that the people (professionals and women) who agreed to participate in the research were more likely to be those who did not value vaginal breech birth. The women who wanted to give birth naturally, and the practitioners who were skilled at facilitating breech birth, could not agree to randomisation into either elective caesarean or a ‘trial of labour’.

The Term Breech Trial, and the general trends to manage birth medically, have led to the current situation that most babies presenting in breech are now delivered by elective caesarean surgery. Breech presentation occurs in 2-4% of all births. The rate of vaginal breech birth in in 2005 was 0.4% of all the 65,000 births that year (Perinatal Data Collection Unit 2006). This means that the majority of babies presenting as breeches are delivered by caesarean.

One exception is the situation of advanced labour with undiagnosed breech presentation, when the midwife or anyone else in attendance can act to either support and protect the birthing process, or interfere in a way that may harm the baby.

Management of a breech birth by midwives working with the natural process is to keep the mother upright to aid the descent of the baby just prior to the birth of the baby’s head. Phrases like “hands off the breech” and “let the breech hang” have been retained by generations of midwives skilled in breech birth. Obstetric management, on the other hand, would usually be to have the mother in lithotomy position (lying on her back, legs in stirrups), and the obstetrician would control the birth, and sometimes put forceps on the head.

This brief discussion would be incomplete without mention of external cephalic version (ECV), when the fetal head is moved gently by the hand of the operator, in a forward roll motion, in an attempt to bring it to the mother’s pelvic inlet. ECV is being attempted from about 35 weeks by some obstetricians and midwives in an effort to avoid caesarean births. The procedure is carried out in hospital, with technological and medical support to monitor the baby.