Mother with daughter as daughter becomes mother: this is a timeless tradition that spans generations. It's a time when deep bonds are strengthened; when some of life's secrets are passed wordlessly from one generation to the next.

The older woman travelled to be with her daughter, and entered her home. She felt respect for her daughter's personal world, her husband and all that made up their lives. She experienced a sense of pride in her daughter's strength of character, and her desire to know and do what is good and right for her family; her child.

And so we shared the days: preparing meals and carrying out ordinary tasks, all the time welcoming reminiscences. When pottering in the garden, or going to the shop for something that might be useful when the time came, we enjoyed the harmonising of two lives for a brief period of time. We shared words of faith in God, the giver and sustainer of life.


We remembered times with my mother. My daughter remembered her grandmother's gentle, loving care. She recalled the holiday at the Gold Coast, when she had helped Grandma make pumpkin scones and a baked jam roly-poly.

I also remembered my mother's gentle, loving care. I recalled how she had been a midwife to me when I gave birth to my second daughter; how the simplest act by her had nurtured me in the way that my lonely heart needed; how the simplest meal that she prepared had met a deeper need than hunger.

This time of birthing has brought three generations of women together, even though my mother's life journey was completed many years ago. She accompanied me, as I accompanied, and at times guided my daughter.

... Her womb prepared to give up its treasure.

... She gave birth, and took her child to her breast.

... She accepted and embraced the work of mothering.

Praise God from whom all blessings flow.
Posted by Joy Johnston at 7:39 pm 1 comment:

The womb grows quietly,
surrounding and guarding the new life within,
sealed until the right time.

A single round window softens,
its fibers are thinned and taken up,
ready for the opening.


The womb gives up its charge, silently closing.

The one in the womb grows quietly
in a warm, watery world.
Secure in a closed and protected space.

The wee one hears sounds from outside,
feels mother's laughter, her song, and her sobs.


Two people: mother with child.
They are together, sharing each moment.

The wee one knows joys and sadness,
loving and longing;
learning life's patterns from within that womb.

At the right time the wee one is guided to a place of readiness.
The round window becomes a vast opening.
The womb that held its treasure so patiently finds new strength
to powerfully and completely expel its contents. 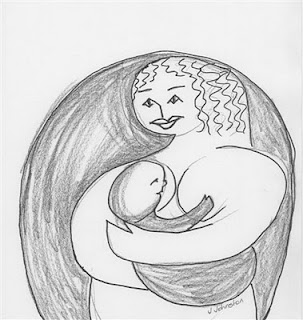 There is a second womb waiting to receive the wee one.
A womb that is bounded by mother's arms, her loving face, and warm strong body.
Within the new womb are her breasts with a bountiful provision. 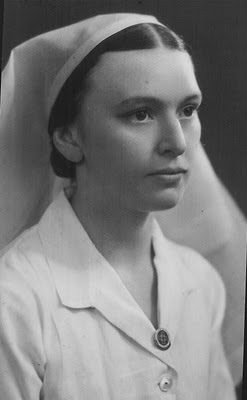 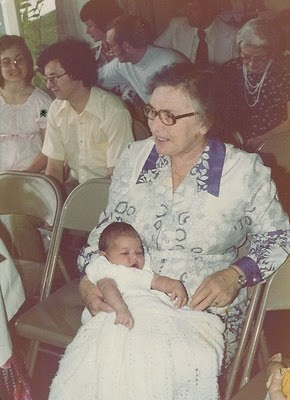 These pictures are in memory of my mother Ella Davidson, who was a nurse and midwife in Brisbane during  the second world war.  After the war she went as a missionary nurse to China, where she met and married my father.  My sister Marion has written that story.
The second of these pictures is also my mother, holding our second daughter, Rebecca, in 1975.  We were living in Haslett Michigan at the time.


Please join with midwives around the world as we celebrate our day.


If you would like to join in with others in a 24-hour global techno-feast of live online celebration, click here.

If you are able to join other Christian midwives in prayer for safe motherhood and safe childbirth, click here.

Midwives can join a forum at the Midwives Place

"The world needs midwives now more than ever"
Posted by Joy Johnston at 5:05 pm No comments:

From routine episiotomy to routine caesarean

It's not easy to challenge accepted culture.

Dr Michael C Klein is a Canadian family physician who has challenged the accepted culture of routine episiotomy. I heard him speak on the topic at the Women's in Melbourne, probably 10 or more years ago. Recently Klein has published an article with the title From routine episiotomy to routine cesarean section: HOW SOCIETY CAME FROM REJECTING ONE TO EMBRACING ANOTHER. The link will take you to the article. Here are a few excerpts.

Klein writes:
"My views about episiotomy were formed by an experience in the early 1960s in Ethiopia, where I worked with midwives who attended births without routine use of episiotomy. Twenty years later while on sabbatical at Oxford University, I collaborated with midwives who rarely employed episiotomy yet obtained good results. Back in my usual setting in Montreal, our family practice maternity group employed the techniques and approaches that I had learned in England.
Our episiotomy rate was less than twenty-percent while the institutional rate was in excess of sixty-percent overall and greater than eighty-percent among women experiencing their first birth."
...
"In the 1980s many physicians still viewed the laboring woman with some suspicion, considering the female reproductive system as complex and intrinsically untrustworthy. It needed to be managed, controlled, and improved. Birth needed to be expedited, the fetus liberated from an unsafe environment. The place of episiotomy in this model was clear. In fact, labour can be slightly shortened by employing episiotomy. Those who felt this procedure was important often expressed concern about the negative effects of birth without episiotomy. In the absence of episiotomy, they were concerned about pressure on the fetal brain, maternal soft tissue support, and subsequent pelvic floor function, including delayed morbidity–such as urinary incontinence. Keep in mind that such thinking characterizes the thinking of the current proponents of elective Cesarean section."
...
"It turned out that episiotomy caused the very trauma that it was supposed to prevent, and those practitioners with the highest episiotomy rates had the highest rates of virtually all other procedures as well."
...
"Reconciliation of differing and often confusing views about normal childbirth among the maternity care disciplines and women is essential for the benefit of women and their families."
...
"Next Steps: At the age of almost seventy-two, I have now decided, along with my multidisciplinary colleagues, that we know pretty much what is going on in practice, education and training. And to correct the faults that have led to many of the problems uncovered will not be easy.
We cannot fiddle with such a flawed system and expect to improve it. But in the next few years, the dearth of obstetricians, family physicians and midwives available to serve pregnant and laboring women, will make it necessary to come up with major creative solutions. This will need to include new collaborative models of care, new interdisciplinary practice and teaching models, new financial arrangements and a whole new way of helping us partner with pregnant women in a way that supports and honors rather than frightens them. And of course we will have to control our own fears and anxieties or we will be unable to make the needed changes in a system that is poised to collapse.
Governments, policy-makers and educators will have to be helped to appreciate the ultimate financial and human costs to which the current path leads. It is rare to be able to help make a change that is both the right thing to do while also saving money for the system.
Hopefully we will not only study change but help make the changes that we will study."
Posted by Joy Johnston at 11:15 am 1 comment: