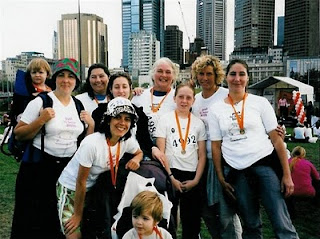 Australian maternity activists have for many years fought for public funding to be made available to women who choose a midwife as their primary maternity carer. The little group in the picture above in 2003 walked in a rally in Melbourne, wearing T-shirts with the message 'Push for better birth'. (you may recognise some of the faces!) 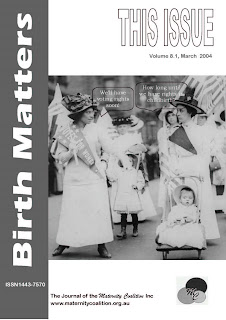 This front cover of Birth Matters, the quarterly journal of Maternity Coalition (I was editor at the time) comes with discussion:
"We'll have voting rights soon."
"How long until we have rights in childbirth?"


Maternity Coalition had facilitated the writing and promotion of the National Maternity Action Plan (NMAP 2001) The key elements of NMAP were choice for women of primary care provider, and place of birth. NMAP called for public funding for basic maternity services to be linked to the individual woman/baby/birth, rather than the complex and fragmented system of item numbers for out of hospital care under Medicare, and all acute maternity care being provided in hospitals. Medical items required in pregnancy and birth would continue. The change that we sought was that midwives would be recognised as primary care providers, and women would have choice without financial disadvantage when they chose a midwife.


The culmination of political and professional efforts to 'reform' maternity services, over these past couple of years, are coming to a head. The Labor government declared that it had a mandate to reform health. The Minister, under direction of the Australian Medical Association, held out a conditional offer of Medicare to midwives - a golden carrot in her hand. Consumer and midwife groups applauded - they saw an end to privately funding their maternity care. Many midwives are still holding on to a hope that they will be eligible for a Medicare provider number.

The condition is HUGE: supervision of midwifery practice by a doctor.

But what looked enticing is now being recognised as a poisoned chalice. Take a sip, midwife, and you're finished. There is no sign yet of an answer to the question 'How long until we have rights in childbirth?'

For most of the past 20 years I have been working to achieve equity of public funding for those women who choose a midwife as their primary maternity carer, and recognition of the midwife as a provider of basic maternity services. Equity means even-handedness, fair play: that services provided by a midwife are entitled to the same public funding as the same services provided by any other maternity care professional. As it happens, the only other professional with the authority to provide professional services in pregnancy and birth is a doctor. The inequity, or lack of fairness in maternity, is that although the midwife is as capapble as the doctor of providing basic maternity services, only the doctor is entitled to public funding for her/his services. And this is in a country that has legislation protecting competition in trade (Trade Practices Act).

This Medicare reform package will not deliver even a pathway to those goals of equity and choice. It will set midwifery back, and I expect it will feed the ever-increasing caesarean and birth trauma rates.

For more reading on this topic: