My thoughts are returning to the supervision topic, as I prepare to attend more meetings in preparation for the introduction of some model of supervision for privately practising midwives.  This additional regulatory process is clearly intended to identify and manage midwives whose practice does not conform with accepted standards.

Becoming a mother is a quintisentially profound moment in a woman's life, regardless of her people group, education, wealth, or any other variable.   A midwife holds knowledge and skill of working in a way that protects, promotes, and supports wellness in the childbearing process and adjustment to motherhood.

The regulation of midwifery, and other health professions, is the process by which a society can have confidence in the profession, ensuring high standards of education and practice, and a reliable process of investigation and calling to account any midwife who is involved in care that leads to adverse outcomes, or allegations of professional misconduct.


In its Request for Tender – Privately practicing midwives models of supervision, the NMBA (2013) has stated that supervision is: “a critical mechanism in the training, support and ongoing safe practice of midwifery. It incorporates elements of direction and guidance through a process of professional support and learning which enables a practitioner to develop knowledge and competence, assume responsibility for their own practice and enhance public protection and safety.”


The Australian College of Midwives (ACM) has encouraged members to communicate the following points to the reviewers, either in the consultative process of focus groups, or via the online survey.  ACM states that:
It appears to me that AHPRA has decided it needs to provide additional levels of regulation for some midwives (and they can, whether we like it or not).  The current investigation is seeking models of supervision, and from the NMBA (2013) request for tender (referenced above) I gather that the primary focus of supervision of privately practising midwives is to be those midwives who are entering private practice, ensuring that they develop "... knowledge and competence, assume responsibility for their own practice and enhance public protection and safety"  A large number of midwives have recently left hospital jobs, attracted by the possibilities of primary midwifery practice in their communities.  There has been no standard pathway for this exodus: each midwife has found her own way, achieved notation as an eligible midwife, and endorsement to prescribe, and hung up their shingle or joined a group practice.

Anything that comes from the NMBA needs to be of a regulatory nature, and that regulation needs to be transparent about what it is seeking to achieve, and properly managed and funded to maintain the integrity of the process.   This sort of regulatory professional supervision could be applied to all midwives who move into private practice, for a period, such as up to five years, with standards against which the midwife and the supervisor are able to assess performance.  Midwives who have had some years of experience in midwifery may be able to demonstrate their "knowledge, competence, and responsibility" over a shorter period of time (eg 1 year), while new graduates of a B Mid course, or midwives who are under Board investigation, may remain under supervision for the full five years, or more.

In developing my position on professional supervision, I must assume that any regulatory requirement must be funded, for the preparation and payment of supervisors, and the ongoing development of the program.

I do not agree with a process that attempts to integrate the regulatory surveillance role with a support role.  Mentoring and support are valuable elements of professional development, but are different, and should be separate from supervision.


Your comments here, or in the facebook villagemidwife group, are welcome.
Posted by Joy Johnston at 6:09 pm 1 comment:

This week the world's midwives are meeting in Prague, for the 30th International Confederation of Midwives' triennial congress.  Many Australian midwives have gone, and will be visible with  distinctive red Akubras (hats) and pashminas.

I am 'following' (to use social media language) from my desk, via twitter

ICM @world_midwives
I am a twitter newcomer, and haven't yet come to appreciate or enjoy the tiny grabs of information and links that come up.  But, I have joined, and I'm ready to learn from the experience.

The theme for the 2014 Congress is ‘Midwives: Improving Women’s Health Globally’, a theme which reflects Millennium Development Goal  (MDG) 5: 'To improve maternal health.'  Governments and global health organisations have recognized that midwives are an essential workforce to achieve MDGs 4&5 by 2015.


There is sound logic in this statement.  Midwives work to promote health and wellness in the mother and baby, during and after pregnancy, and during the climax of birth, as well as to provide and access appropriate emergency assistance when the need arises.

It is estimated that almost 90% (87% to be precise - see IMPACT poster above) of the essential maternity care for women and newborns can be provided by midwives.  These statements seem hollow in Melbourne, Australia, where the majority midwives have no idea of how to practise their profession outside a hospital, with high rates of every intervention being the norm.  I live within 30 minutes drive of three tertiary hospitals (Women's, Monash, and Mercy), and several slightly smaller public hospitals which provide emergency obstetric services (Box Hill, Angliss, Dandenong), as well as a gaggle of private maternity services.

Even the (growing) group of midwives who are eligible to provide (publicly funded) Medicare-rebated services, and who have authority to prescribe medicines, are required, by law and strict regulation, to 'collaborate' with the medical profession, whether the woman in our care needs it or not.   We are forced into a pattern of over-servicing of those who least need it.

The poorest outcomes in pregnancy and birth occur in parts of this world where women do not have access, firstly to midwives and then to other basic maternity services: particularly parts of Africa and Asia.  These are communities where the burden of disease, such as anaemia, linked to poverty, malnutrition, intestinal parasites, malaria, ... place women at higher risk of poor outcomes.  A friend of mine who has worked with MSF in several poverty-stricken war-torn locations told me she has never before seen so much blood, or so many dead mothers! 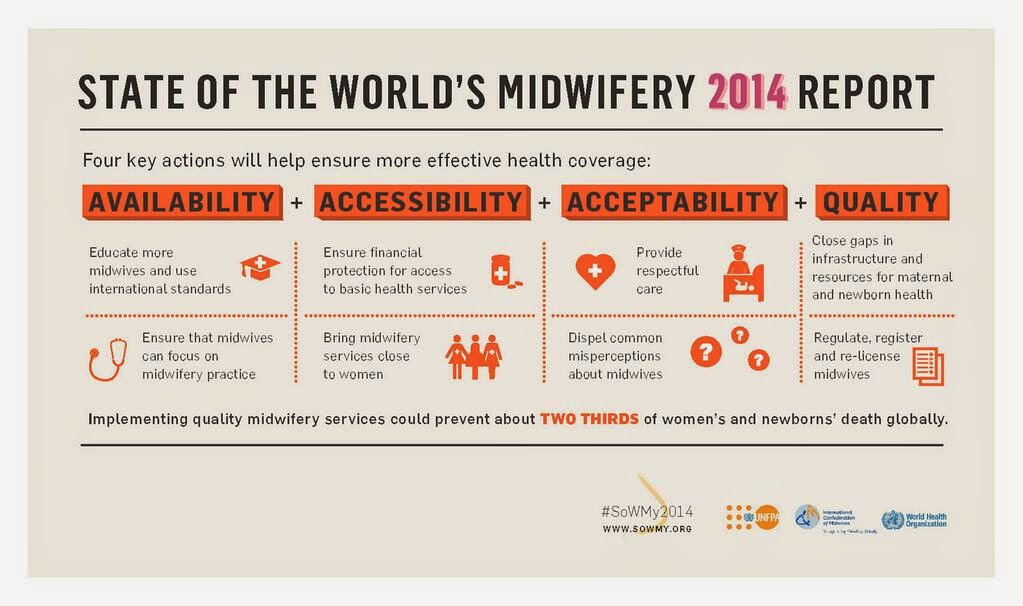 There is little or no acknowledgment in the Australian mainstream hospital models of maternity care, of the extra-medical (the part unknown to the medical community) contribution of midwifery to maternity care, and health promotion.  The hospital protocols are dictated by the medical/obstetric faculty, in close collaboration with the insurer.  These protocols are not wrong!   Hospital insurers report costly payouts:
The insurer of Victorian public hospitals, VMIA, reports that although obstetric claims account for only 16% of claims processed, they are responsible for 33% of the costs incurred (statistics given at a VMIA webinar on Litigation, 3/6/2014).   [I have been writing at this site recently about maternity care dictated by the insurer, and it's easy to understand why it's in the insurer's interest to minimise potential litigation.]


In this context, I consider that biggest problem in hospitals is the failure to protect pregnancy, birth and the nurture of the newborn as precious, natural processes.    The fact that never ceases to amaze me is that our bodies are so wonderfully made.

Pregnancy, birth, and the nurture of children are processes driven by an incredibly powerful orchestration of hormones and physical features that support and interact whether we understand the processes or not.

the natural, healthy processes of women's and babies' bodies.  This is the non-medical, non-interventionist, non-therapist side of midwifery.  Yes, there is an aspect of midwifery that demands timely and effective intervention when indicated.  It's the other side of the same coin.

'In normal birth there should be a valid reason to interfere with the natural process.' (WHO 1996)

The phrase 'protecting, promoting, and supporting ...' has been used many times in the past 2 decades with reference to the Baby Friendly Hospital Initiative (BFHI), introduced around the world by WHO and UNICEF.

But, the protection, promotion and support of breastfeeding does not begin when the newborn baby is taken into the mother's arms and cradled at her breast.  The response of a newborn child to the stimuli during and after birth depend on many other aspects including mother's health and nutrition, and the presence of inhibitory substances such as narcotics and regional anaesthesia that causes temporary paralysis.  The response of a woman to her newborn child is also changed by physical and chemical changes that over-ride of obliterate the mother's feelings and reactions in birth.  These medical procedures and substances need to be restricted, for use only when indicated, and with extreme caution.

I am blown away by the statistic quoted earlier in this post, that


It is estimated that almost 90% of the essential maternity care for women and newborns can be provided by midwives.

From my sphere of knowledge and influence, in Melbourne's middle class, leafy Eastern suburbs, I find it difficult to believe, yet I know that this statistic has been made on reliable information.


In concluding today's post, I want to acknowledge and thank God for a wonderful young mother, Anna, and her husband Josh, who this week have welcomed our newest grandchild: a healthy baby born at Term, spontaneously, into the loving arms of a strong, healthy mother.

Posted by Joy Johnston at 10:24 am No comments: