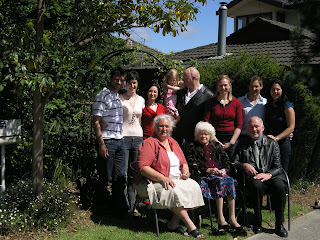 Why protect normal birth?
[Photo of our family, taken Christmas day 2007]
The idea that normal birth should be protected had not occurred to me when I was a young mother, back in the '70s. Protect from what, or whom? You only protect something that is under threat.
I was not idealistic about my own ability to engage in labour, and to give birth to my children.
There was an unspoken rule that medical and surgical interventions were only used when necessary, and everyone understood that the doctor would act in a way that protected the interests of the mother and her baby. I never considered that there was any choice other than to expect my body to do the work of childbirth. There was no notion of consumer choice, or discussion about decision making. The doctor/nurse/person in authority - knew best.
I don't want to imply by this that maternity care was particularly good when I studied midwifery, and became a mother myself, in the 70s. In fact it's difficult to find a time, or culture, where people have understood the power and rightness of normal birth. Perhaps if we look way back to the Biblical time described in Exodus 1, we find an example of civil disobedience that suggests both the midwives and mothers held birth as something that not even the king could interfere with.
"The king of Egypt said to the Hebrew midwives, one of whom was named Shiphrah and the other Puah, 'When you act as midwives to the Hebrew women, and see them on the birthstool, if it is a boy, kill him; but if it is a girl, she shall live.' But the midwives feared God; they did not do as the king of Egypt commanded them, but they let the boys live. So the king of Egypt summoned the midwives and said to them, 'Why have you done this, and allowed the boys to live?' The midwives said to Pharoah, 'Because the Hebrew women are not like the Egyptian women; for they are vigorous and give birth before the midwife comes to them.' So God dealt well with the midwives; and the people multiplied and became very strong. And because the midwives feared God, he gave them families." (Exodus 1:15-21)
The threat today to normal birth is quite different, but it calls for a similar degree of bravery on the part of those who are guardians of the natural processes.
Posted by Joy Johnston at 7:46 pm No comments:

Thismorning I witnessed the birth of a healthy baby girl. A few hours later I returned home, leaving mother and baby resting quietly in bed. Baby had suckled strongly, and was now asleep. Mother had not slept much last night, and was happy to enjoy the sweetness of her new baby daughter. I will visit them tomorrow, and a few more times in the coming week, and check that all's well.

A couple of weeks ago this mother, who I will refer to as Lisa (not her real name) was facing the difficult choice of either elective caesarean, or vaginal breech birth against medical advice. Lisa had told me she thought her baby was presenting breech, and after palpating her belly I agreed. After visiting the hospital the presentation was confirmed, and Lisa was told that she would no longer be eligible for the Birth Centre, and would be scheduled for caesarean birth.

Lisa immediately visited her traditional Chinese medicine practitioner, who used acupuncture and moxibustion, to no avail. This process was repeated as the days passed.

I spoke to an obstetrician who is expert in external cephalic version. I outlined the situation that Lisa is a mother who has previously given birth, and is now at Term; she and her baby are healthy; the breech is mobile above the pelvic inlet, and there is plenty of amniotic fluid. The obstetrician confirmed my assessment, that external cephalic version should be attempted, and was likely to succeed. He gave me the name of the doctor who he knew would be able to turn the baby at the hospital where Lisa was booked. He knows that I am a homebirth midwife, and I commented that Lisa would consider breech vaginal birth at home, and his response was quick "so that's all the more reason why this baby should be turned!" I agreed.

Lisa went to the hospital and the midwife spoke on the phone to the doctor about arranging external cephalic version (ECV). The doctor said it was too late in the pregnancy. She usually does ECVs on Tuesdays, and next Tuesday she would not be at the hospital. I encouraged Lisa to persevere - I felt that the doctor needed to palpate Lisa's abdomen, and feel how ready this baby was to be turned.

After several visits to the hospital for monitoring, and a considerable degree of persistence, Lisa was seen in person by the doctor. The doctor agreed that a turn should be attempted, and told Lisa she could do it that day. The version took only moments, and was successful.

Attempting ECV for a breech at or near Term is a reasonable option in protecting normal birth.
Posted by Joy Johnston at 5:25 pm No comments: