Notes from my practice

A baby has been born, at home. After a couple of days of pre-labour, frustratingly coupled with winter colds being suffered by the whole family, the labour began. I was called at about 3 am, and headed out into the country, driving through towns, and past vineyards and farms.

The midwifery student arrived just after me, and we went into the home together.

The student has kindly shared her reflections with me:

"When we arrived the woman was upright, pacing with her ipod on and using lots of heat packs. The room was lit by candles and the fire was burning.
"Suprisingly we did not do an assessment on arrival but instead proceded to unpack things. I helped to test and check the emergency equipment and positioned everything in unobtrusive but accessible places in case they were needed (they weren't). After about 20mins of setting up we were ready to do an assessment. It the very first of many stark contrasts to hospital midwifery in that this only included a temperature and fetal heart rate. The midwife explained that as the woman's BP had been stable all along there was no evidence to support it being unstable in labour, in addition we already knew the baby was cephalic and well engaged (from our previous appointments) so a palpation was unnessessary. A VE [vaginal exam] was also unnessessary as it wouldn't change the course of action/treatment at that time. No timings either, as there is no syntocinon to put up. All in all our assessment was about observing behaviours."


It has been an interesting exercise for me to see this birth through the eyes of someone who is new to the profession. Someone who recorded, after the birth,
"It was the first time I have seen:


My enduring memories from this birth centre on the normality of everything that happened, contrasting with the potential threat of illness. The illness that this mother, father, and family faced at the time was that they all had colds - common garden variety upper respiratory viral infections. Coughing, congestion, chills, sleeplessness ... they had it all.

By the time labour was established the mother was weary.
As the time for birth drew closer, and the mother became frustrated by her physical weakness, I asked her to rest quietly in the womb of warm water. Some would call it transition. The light from candels was dimmed. The support crew withdrew to the kitchen, and had cups of tea and pieces of toast.

The miracle of birth unfolded and a beautiful pink baby boy, with a shock of black hair, was lifted out of the water by his mother and taken into her arms.

The miracle of birth continued as the child transitioned from placental circulation to strong, normal breathing, and began his lifelong search for good food.

The miracle of birth continued as the mother stood and released her baby's placenta, with only minimal blood loss.

Mother and baby are well and happy.


Another mother is waiting for her baby to be born.

She is a mother who has experienced the cascade of interventions in her previous pregnancy, with induction of labour, epidural, caesarean birth, separation from her baby, the baby being given formula feeds, and weeks of distress, pain, bonding and breastfeeding difficulties.

She is a mother who is longing to give birth to her baby, and who is learning to face her fears and work with a simple decision making process as each day passes.
Posted by Joy Johnston at 5:25 pm 2 comments:

ANNOUNCING: Midwifery from my heart 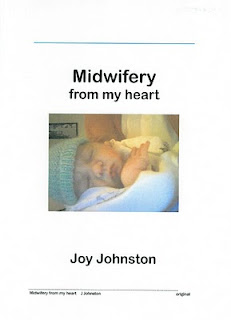 Midwifery from my heart is the first in a new e-book series.


Introduction to the Villagemidwife e-book series

I am a midwife. My words, thoughts and actions have been formed over many years and a unique set of experiences: the world into which I was born; the mother who bore me; the family that nurtured me; the towns and communities that have allowed me to be me, and this wide open land and its people.

I like to think that these are my thoughts, yet I know that much of what I say is my own filtering and organising of what I have absorbed from those around me. Although I am the speaker, I am not the source.

Midwifery belongs to women. The midwife is ‘with woman’, a companion for a distinct and definable childbearing event, in a special partnership. Midwifery does not belong to theorists, although the clear expression of the ‘with woman’ partnership by thinkers has helped set great value on this simple phrase.

Midwifery is women’s business, evolving and moving with women, in our own time and space, along with our joys and sadnesses, our changing bodies, our children who are sometimes wonderful, and sometimes bring us near despair, and our hopes always for a better future.

Midwifery from my heart is about the life I know and love. It’s from my heart because I have learnt it, deep in my own life, and in the homes and lives of the women who have taken me with them. It’s midwifery because it’s ‘with woman’.

"By choice, in our adult years, many of us choose to travel away from our home base, to go on journeys of various lengths, from the small to the epic. We seek adventure, novelty, change. We launch ourselves on ventures near and far, with the comfort of both a phone card and a return ticket in our hip pocket. From a secure base, we revel in being on the move, delight in the foreignness of our encounters and welcome the rejuvenation of self that accompanies these departures from our norm.
...
"When a journey is not of your choice, if you are ill prepared for the road, if you have little idea where you are going, how long you will stay, where or when you might find a place to rest, how to speak the language, the allure of travel fades." [Quoted from a paper 'The inside journey through care', given by Jennifer McIntosh, PhD, Clinical Psychologist, Family Therapist, Researcher, 2001]

The universal expectation of pregnancy is the birth of a baby. The 'knowledge' is not only knowing in our minds; it's also known and prepared for hormonally in every cell of the mother's body. Even the father's body may experience hormonal changes that are likely to prepare him for the anticipated change.

Just as the fact of a baby is hormonally heralded, the normal physiological process of childbirth anticipates a specific journey for the mother and her child. We know there is an intense (internal as well as external) period of nesting; then the onset of spontaneous labour which builds as oxytocin pulses, and uterine muscles contract and retract, and opioid-like substances surge, and the cervix is drawn up and opened to release the child. The peak of adrenaline just prior to the expulsive phase prepares the child for the huge transition he must make in leaving one world and entering another.

The journey that is physiologically anticipated includes the mother's recognition of newborn's cry; a babe in her arms; a babe with all the sounds and smells and movements that stimulate further surges of the love hormone; a babe who soon begins his life-long quest for food and proceeds to draw milk from her breast.


The unexpected journey shocks and confuses the mother in this finely balanced hormonal state.

Hours later she is numbly aware that her arms are empty; that her breasts have not been touched. Her mind searches for explanations; for a map to guide this journey that she did not choose.
Posted by Joy Johnston at 8:14 am 1 comment: