Thinking about Christmas cards and greetings

Some of what I post here has been comments I made on my Facebook account, so if you are a 'friend' of mine (as defined by FB) you may have seen some of this.  I am aware that some who receive notification of my writings at this villagemidwife site may have no other links with me.  So rather than speaking just to 'friends' - and only those whose FB accounts are set to receive my posts - I have moved my deliberations to this site.


Has anyone else pondered how very complex our sending and receiving of Christmas greetings has become? There was a day when everyone bought their standard Christmas cards by early December, put an address on an envelope, wrote a few words, affixed a special stamp that was less expensive than ordinary stamps, and posted them. Done and dusted! In those days the verb to 'post' referred to use of the post office. 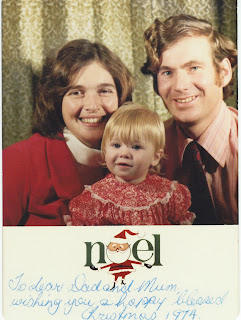 Then we had the option of a personalised card, with a picture that meant something special about the person sending the card. This card below, with our little family: Noel, beautiful little Miriam, and I, was our 1974 greeting. Over the years I have looked out for a good family pic to include in our annual letter. That hasn't always been easy. Sometimes one or more of the children may be less than cooperative ... (you know what happens then!) And then, as the family grows up, I have sometimes wondered if it's OTT (over the top) to (over-)share on the lives of our offspring. Those questions come and go without any resolution. We have generous, loving offspring who accept their parents without too much critical comment.

In the past 20 or so years we, and most of our peers, have embraced everything digital. Some haven't. Which brings me to my initial comment on the complex nature of sending and receiving Christmas greetings. So now we send a message via fb, as I did yesterday, as well as some by email, and paper copies via Australia Post to a few special people for whom the other systems are not acceptable. And my 'system' includes 'posting' our annual greeting on a blog http://joyandnoelannual.blogspot.com.au/ which gives me, and anyone else who finds their way to the site, me a readily available summary of our lives.
Are paper copies of a greeting more meaningful than digital?
That's a question that I will not try to answer.

We live in a day when there are so many ways of connecting with people we know that we could easily become overwhelmed. The Christmas card in the post 30 years ago was probably a lot more meaningful than it is today, when the pretty cards can also be sent by email, fb, messenger, blogs and other forms of social media. Are friendships enhanced by one method of communication or another?

I have found the old style of communication - face to face, with a loving hug or smile, or a phone call from someone who I won't be able to see - these are the ways that I feel loved and cared about. And of course we are limited to just a few people with those old forms of communication, compared with the massive reach of digital magic. So can I encourage anyone who reads this to give your loving greetings in person, or a phone call, to someone who may not have much personal contact with others.
Posted by Joy Johnston at 8:34 pm No comments:

The woman found it difficult to trust anyone.  Very difficult.  Her anxieties about bad people and bad things were overwhelming.  'They' were likely to force her to take medicines that were bad.  The bacteria and viruses in public spaces were bad.  The 'system' would force her to have surgery that she didn't want.

The woman became pregnant.  She had been pregnant a couple of times previously, but had terminated those pregnancies early.  She wasn't ready then.  For some reason this baby stayed in place and before long she was experiencing new feelings - movements.  Her need to control must have been weakened as the maternal and placental hormone levels surged.

She was strong and healthy, and avoided anything that sounded like professional maternity care.  But she was curious, and a bit of a geek, well versed in all things digital, so a couple of ultrasound scans were arranged through a local medical practice.  Fascinated by the imaging, she asked lots of questions of the technician.

The woman found a new world opening up in cyber space.  Groups and forums, with varying levels of security, brought a host of information and options, as well as a sense of belonging.  It wasn't long before she found herself linked to a network of like-minded women, or at least she thought they were.  One was close to giving birth, and described her plans to bring together a supportive group of women, all with positive energy, so that she could give birth in a state of ecstasy.

The woman found a fetal monitoring device on e-bay.   She bought it, strapped it on, and listened to the rapid wop-wop-wop, with occasional kicks or hicoughs to break the monotony.  Over time the woman was becoming more excited about the thought of 'free' birth.  It ticked all her boxes.  And a couple of friends from the online community had told her they would help her.  These women were experienced, from their own births especially.

This story is based on real people; real events.  I do not want to describe it further.  The reader can envisage the possibilities.

There have always been people with anxiety neuroses and other aspects of mental health impairment.  The distrust and fear of everything bad, as this woman experienced, is not new.   A midwife who earns the respect and trust of a woman whose mental state is fragile may be able to support and empower her in a restorative way, as she prepares to bring a baby into her life.

The element that has recently been added, in some cases triggering the perfect storm, is the information overload that has been unleashed via the internet and social media.

In this story there has been no midwife, no systematic maternity care or surveillance.  Babies will eventually be born, even if there is noone providing care or checking health and development.  In this world of distrust the midwife is seen as a medical person, and anything medical is to be avoided and not trusted.  But, you will say, surely the ultrasound scans are medical?  Surely the strapped on monitoring device is medical?  Of course.  This world is not always logical.  The fragments of professional knowledge that can be shared digitally from person to person via social media can give a sense of great knowledge, especially to the novice who is just beginning to navigate the terrain.

In my experience this woman did seek out midwifery care, quite late in her pregnancy.  That's how I come to know about her.  There was no development of a mutually trusting relationship or partnership.  Distrust was worse than the germ-phobia.  My professional guidance was received at arms length, and it was being checked against the mirage of wisdom of the team of guides.  On the positive side of the ledger was a healthy baby and a physically healthy mother, and a process that does not submit to intellectual control, but is driven by wonderfully powerful physical and physiological-hormonal forces.


It sounds so realistic, so do-able, that now I'm getting anxious.

Already many women in labour are connected to continuous electronic fetal monitoring devices that record the baby's heart rate and the time/duration of maternal contractions, maternal pulse and blood pressure.  Already those machines are linked to a monitor that is usually stationed at the 'desk' of the birth suite, and can be looked at by whoever is at the desk: a midwife, obstetrician, or someone else.  Already digital cameras exist that could be placed in the woman's vagina to record the dilatation of the cervix and the progress of the presenting part.

Our society has embraced technological interventions in pregnancy and birth to such a degree that these points I have imagined are not really fanciful.  We have the technology.  Someone just needs to put it together.  And just as our world is preparing for driver-less cars, the medico-legal world is ready to embrace technology that would give a new level of assurance, accountability, and what would be seen as less chance of human error.  Although research has failed to support improved outcomes from routine continuous electronic fetal monitoring, few women avoid it in maternity care.

The next step with the introduction of this unnamed device is that a woman who cannot trust the 'system' could see this as useful for her DIY 'free' birth.  Just as she strapped on the monitor at 26 weeks' gestation and listened to the rapid thudding of that tiny heart, she would likely see this device as something that would give her confidence, without the threat of 'bad' things happening at the hands of an un-trusted other person or system.

Yes, the system is full of flaws.  Yes, there are people with the title 'midwife' or 'doctor' who do not understand the woman's fears  and anxieties.  I hope maternity services will be reformed around care that centres on the needs of the individual woman, and enables her to trust the care she receives, and understand the imperfections as they arise.


I would like to think that a device will not replace the midwife.
Posted by Joy Johnston at 3:14 pm No comments: