From time to time as that special day passed I rubbed my belly, enjoying the sensation of tightening as the fundus became firm. I was as confident and ready as a 23-year-old entering motherhood for the first time could be.

For most of the week prior to this day we had gone for walks in the evening, and the tightenings had come for a while, then stopped. Each night as we went to bed I wondered, "Is this the night?" Each morning I awoke, rubbed the bump that protruded under my diaphragm, looked in the mirror at the enormity of my previously flat abdomen, and continued in waiting mode.

The special day was Thanksgiving Day in the USA. We had settled in to our home in Michigan; Noel had commenced his graduate studies in the Dairy Science department at Michigan State University; and we had been invited to join the Professor, Wayne Oxender DVM, and his partner, for our first American Thanksgiving meal.

Our hosts had prepared special food that had significance to the celebration of thanksgiving to God for preserving the lives of the Pilgrim fathers through the previous year, with food stored for the coming winter.

Decorations had been carefully made using corn husks and natural fibers. The turkey had been stuffed and was basted carefully as it roasted to perfection for many hours. I had never seen a turkey like that one. There was abundant sweet corn, sweet potatoes, and corn bread. Probably a dish of spinnach. I don't remember the details. A large bowl was set up with hot apple cider that had sticks of cinnamon floating in it. We dipped into it many times. It was sooo good!

This was a totally new culinary experience for a girl from sunny Queensland. Then pumpkin pie - who ever would have thought of using pumpkin, the staple vegetable, as a dessert? On top of the servings of pumpkin pie someone squirted fake cream out of a pressurised can - the fashion at that time. Who ever would have thought of putting cream into a pressure pac? The irony of using fake cream on this most basic of 'back to the simple life' feasts stuck in my mind, but I was too polite, too blown away, to say anything.

As I said at the start of this post, I was experiencing some tightenings which were preparatory for my labour with my first child, Miriam. That evening the labour became established, and I gave birth the following day.

The good company, good food, and totally new world that we experienced in late November 1973 prepared me for motherhood. Being surrounded by members of the veterinary profession, with their special interest in reproduction and raising of calves, was good for me. I have often reflected on that period in my life, and it has in many ways supported my efforts to work in harmony with natural physiological processes in the birth and nurture of babies in my care.
Posted by Joy Johnston at 12:26 pm No comments:

Members of my family are at present dealing with major challenges as they progress along the pathway towards the birth of a child.

I am a midwife who seeks to promote, protect and support wellness and wholeness in pregnancy, birth and the nurture of a baby. This is the usual situation for most women.

I would like to especially acknowledge anyone who finds themself on an unexpected, and really unwanted (if they had been able to choose) pathway in the journey to a birth.

With this in mind, I am linking this post to the blog of my nephew Dave and his wife Petrina, whose unborn baby is being treated for heart failure. As I read through the posts at their blog I am confronted again and again with the uncertainties of this particular case. I am also thankful for the openness and clarity with which these young parents have attempted to share some of their feelings - not knowing where the journey will take them.

Most of you who read my blogs will be doing so out of your interest in midwifery.  The question to the midwife is, how can I be midwife, 'with woman', when the overwhelming focus of care and decisions that are being made are intensely medical; when the birth of this baby will almost certainly be surgical, and contact between mother and baby will almost certainly be minimal as a new team of specialists assumes care for him or her.

Any complicated pregnancy presents this challenge, to a greater or lesser degree.  Increasingly specialist medical knowledge and technology are pitting themselves against conditions that would previously have been incompatible with life - this phenomenon appears to be unstoppable from the perspective of science and medicine.  Where there is any hope of life, parents are likely to give permission for whatever is offered.

We say that every woman giving birth needs a midwife.  The midwife for a woman in a complex and challenging medical birth focuses on the woman as a whole person - not just as the carrier of a very special baby.  Many of the plans that are made by women approaching normal-physiological birth cannot be considered.  The baby's *condition*, or the *complication* take on leading roles in the story that is being played out in real time.


If you have read this far, you might wonder why I have included a picture of a little bonsai tree from my garden.  The reason is, that in a special way, I learn lessons from tending these wonderful but fragile plants.  There is a sense of connection between a living thing and its carer, as I know that without daily care and special knowledge this tree will die.  There is such beauty in the changes that come with seasons - I had previously posted a picture of this tree in the winter, having lost its leaves.  These miniature trees offer me a special life focus, as I tend the creature, and seek to work in harmony with the Creator.
Posted by Joy Johnston at 12:05 pm No comments: 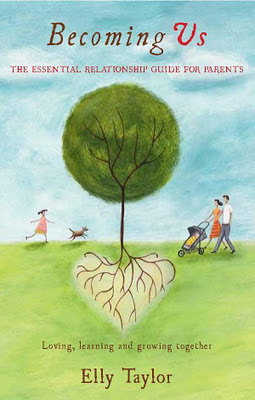 The focus of the midwife is, without doubt, the woman.  Midwife means, literally, 'with woman'.

But the woman is much more than the bearer of a child.  The woman becomes a mother, in the context of a family, and the child is nurtured within her or his family.  The child grows physically, emotionally, and spiritually as food, shelter, and protection are provided by both mother and father, and values are taught from before birth.  Focus on becoming parents is included in the work of the midwife, and extends well beyond the scope of midwifery.

I have recently received a copy of a new book, "Becoming Us, The Essential Relationship Guide for Parents" by Elly Taylor.   I am looking forward to reading it.

It's available in all good book shops, ABC shops and on-line.

For more, see the linked website Parent Support Online.
Posted by Joy Johnston at 10:30 am No comments: