Application of the evidence into mainstream maternity care is quite another matter.

From my perspective, it's great to see another piece of reliable evidence supporting midwifery continuity of care /caseload midwifery/ one-to-one midwifery.  This evidence is published in a respected professional journal, BJOG, and International Journal of Obstetrics and Gynaecology, reporting on research carried out under the strict rules of randomised controlled trials, by the La Trobe University team of midwifery academics, led by Associate Professor Helen McLachlan.

The title of the paper is:
Effects of continuity of care by a primary midwife (caseload midwifery) on caesarean section rates in women of low obstetric risk: the COSMOS randomised controlled trial.
Authors: McLachlan et al, BJOG (2012).


The team of authors of this paper includes midwife academics who were prominent in the 'Team Midwifery' research from LaTrobe Uni more than a decade ago.  'Team midwifery' was adopted into many mainstream maternity units, in an attempt to reduce the huge number of midwives who provided care for individual women during their prenatal, intranatal, and postnatal experience.  Women were allocated to the 'Green team' or the 'Pink team'.  Midwives work ordinary hospital nursing shifts.  Women under 'team midwifery' are usually attended in labour by midwives who are strangers.

Two papers addressing Team Midwifery, authored by Professor Ulla Waldenstrom and others, and Mary-Anne Biro and others in 2000 in the journal BIRTH presented the research findings, and a commentary was written by Karyn Kaufman.  Kaufman, a midwife academic and a member of a community-based midwifery practice in Canada highlighted in her review the lack of difference between the control or ‘standard care’ and the intervention, team midwifery.  Kaufman commented that “midwifery care that follows strict medical protocols is not the same as midwifery care that is enacted from a philosophy of normal birth and is individually negotiated with labouring women.”  This statement sounds logical, yet many Australian midwives at the time may not have realised that midwifery care for well women can be enacted from a philosophy of normal birth.

Besides having fewer caesareans, women allocated to 'caseload' were more likely to have a spontaneous vaginal birth, less likely to have epidural or episiotomy, and their babies were less likely to be taken to the special care nursery than those who received standard care.

Good for mother, good for baby.
Good for the midwife, too.

In the highly formal language of academia, the authors have boldly come to the conclusion that the midwives with caseloads "can make a difference by reducing the caesarean section rate."

When a reduced likelihood of caesarean can be demonstrated for women at low risk of complications, it's time for the midwifery profession to celebrate.

This is reliable evidence.
This research was carried out under strict controls.

Midwives and maternity services must be challenged to apply the evidence to practice.  The usual practise of midwifery should be in a caseload model, working autonomously in their scope of practice to promote, protect and support physiological processes in birth whenever possible ('Plan A').  Not as shiftworker nurses in hospitals who work as assistants to obstetricians.

Only when midwives are willing to take action on evidence will we see improvements in birth outcomes: healthier mothers and babies.

The Midwives Work DVD premiered at the International Confederation of Midwives Congress in Durban South Africa in June 2011, in front of 3000 midwives and others interested in maternity care from over 100 countries, has attracted huge interest. It highlights the importance of the role of the midwife in reducing maternal and infant mortality as well as the issues and challenges they face.

(Thanks to Julie Garrett for the link to this film.)
Posted by Joy Johnston at 8:00 pm No comments: 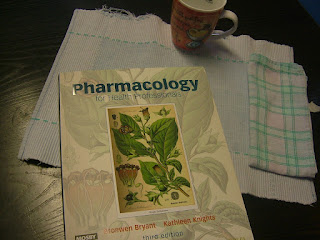 It starts on Monday.
I am planning to keep a record at my other midwifery blog Click here.
Posted by Joy Johnston at 2:14 pm No comments:

When a midwife walks into a hospital with a woman for whom she is providing private midwifery services, that midwife faces a complex and often challenging work environment.

Recently I went to hospital with a woman who I will call Melissa, who was planning VBAC.  Melissa's first child had been delivered by emergency caesarean, after induction of labour at 42 weeks.  This time Melissa was well informed, and intentional about all her decisions.

Melissa had experienced a difficult week 39-40 in her pregnancy.  There were several nights without much sleep, and she had a cold.  A couple of days after her expected due date, Melissa asked me to assess her internally, and consider a 'stretch and sweep' of the membranes at her cervix.  I was pleased to report a well applied head, a very thin cervix, and about 1.5cm dilation.  With very gentle stretching of the cervix, I felt confident that the labour was imminent.

Sure enough, Melissa called me a few hours later, and I went with her as she was admitted to the hospital birth suite.  Melissa laboured strongly, and together we considered any decisions that needed to be made, following 'Plan A'.  I continued 'with woman' through the labour and birth, and afterwards.

There is nothing remarkable about this little account.  However, the matter that has prompted me to write about hospitals and independent midwives is the question of what to call a midwife who goes to hospital with a woman in her care.

I call that midwife a midwife.

Because the independent midwife does not have visiting access/ clinical privileges/ credentialling in that hospital.

This is true - Victorian public maternity hospitals have dragged their feet on this matter.  Despite government-supported indemnity insurance for private midwives providing intrapartum care in hospital, there is no likelihood of hospital visiting access in the near future.

So does a midwife cease to be a midwife, just because the hospital refuses to roll out the red carpet?  Of course not!  A midwife is 'with woman': not with a setting for birth.  The midwife's registration is with the regulatory body, which is not under the management of the hospital.  And, let's remember that if a midwife acted in a way that was considered unprofessional, she or he would expect to be reported to the regulatory authority as a midwife, not as a 'support person'.

The ICM definition of the Midwife
declares that the midwife's Scope of Practice is:


The midwife is recognised as a responsible and accountable professional who works in partnership with women to give the necessary support, care and advice during pregnancy, labour and the postpartum period, to conduct births on the midwife’s own responsibility and to provide care for the newborn and the infant. This care includes preventative measures, the promotion of normal birth, the detection of complications in mother and child, the accessing of medical care or other appropriate assistance and the carrying out of emergency measures.


'Support' is listed in the definition as one of the elements of midwifery.  I do not want to seem to devalue support.  But the point I want to make is that support is a part of the midwife's scope of practice: not an alternative to midwifery practice, and definitely not an alternative to the title 'midwife'.

Thankyou for your comments.
Posted by Joy Johnston at 7:52 pm No comments:

"Within the [ ] health services financing structure, there is no room for financing the disutility of 24/7 availablity." [Mariel Croon, Human Rights in Childbirth conference, 2012]

One unavoidable feature of midwifery practice in primary maternity care is that a midwife needs to be accessible to a woman 24 hours a day, and 7 days a week, except, of course, if the birth is a medically scheduled and managed event.  If the midwife and the woman have agreed prior to the birth that they will work together when that time comes, that means the midwife is under a considerable degree of commitment.

I have often pondered the wastefulness, from an economic/time management point of view, of caseload midwifery. Of course I can understand the bean counters, who want midwives to be rostered to hospital wards, for shifts that can be predicted. Of course I understand why inductions of labour happen in hospital maternity systems, as managers attempt to match peak activity periods in the hospital with the times when adequate staff have been booked.  Of course I understand why midwives choose to work shifts in hospitals.

At present I am waiting for three babies: one 'due' last week, one this week, and the third in a week or so. Babies in my practice often cluster, and I can't worry about it because it is outside my control.  I must see each woman as an individual, and not allow stress about the time of onset of spontaneous labour to complicate our relationship.

The quote above, and particularly the phrase  "disutility of 24/7 availablity" caught my attention when I read it.
The dictionary meaning is:

My decision to work as a midwife, placing the 'activity' - the needs and wishes of a birthing woman above my need to 'satisfy human wants' - be able to plan my time for work and play and sleep and whatever else - is a decision on principle, not on economics.  The principle relates to my understanding of the unique trust relationship that can be established between a midwife and a woman, enabling the woman to proceed down the often unpredictable and challenging path that leads to the unassisted, unmedicated birth of her child.

Posted by Joy Johnston at 5:19 pm No comments: